Alaun'ae was a harvester who was well known for being one of the most active advocates for the creation of mushroom beer. While many of her first attempts failed, she did eventually concoct a beer that was at the very least edible if not entirely tasty. She is listed as having died during the Dvaraka invasion.

Standing at 6'7", Alaun'ae was slightly taller than the average Tei'kaliath. Her hairstyle consisted of undyed white hair kept in a simple knot. Attire was a set of work cloths consisting of baggy pants, baggy long sleeve shirt, and and an apron, all the color of red wine.

Alaun'ae was raised on a farm, supplying the clan (the Shifaye'sindil royal family) with mushrooms. Her family had lived there in many generations, always been loyal to the clan, as such she learned to appreciate the clan and family. In the work as farmer she learned to be grateful for the help and kindness of others. Knowing this she always tries to be helpful and kind to those who need her.

Being a mushroom farmer means that you work hard every day, and thus becoming physically strong. She is also quite handy with her tools of trade. Farming mushrooms doesn`t necessarily mean that you only know how to grow them. Her family also had a small home business of brewing mushroom beer, and because of that she has some limited skills in that area.

When the clan fell she was separated from her family. Getting the life she knew and loved completely destroyed she wandered aimlessly for several days before meeting up with the caravan. She was starving and in shock but were treated by the kind people in the caravan. This has resulted in a great gratitude and a feeling of a debt in need to be repaid.

When she learned that the caravan was leaded by the sole heir to the clan she decided to do her best to help contribute for the clan`s survival.

Truly words to live by. 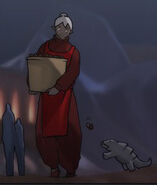 Add a photo to this gallery
Retrieved from "https://pathtopower.fandom.com/wiki/Alaun%27ae?oldid=10288"
Community content is available under CC-BY-SA unless otherwise noted.