In Tei'kaliath lore, Ana'thelin is the second known Tir'ay Master and founder of the Soft Form of Tir'ay. Originally she was a student of Su'jhar, the first Tir'ay Master, but the two held very different views on the form of tir'ay. While Su'jhar was hard and unyielding, in contrast Ana'thelin was described as being "soft and strangely passive." Eventually Ana'thelin set out to find her own way, discovering what would become known as the five aspects of tir'ay. Her philosophy was that there were five aspects of the material body (bone, muscle, blood, breath, and will) that a fighter must understand in order to fight effectively. Eventually she and Su'jhar reconciled and the five aspects became incorporated into tir'ay along with the three realms and the four engagements.

After some time Ana'thelin and Su'jhar were joined by Ellisin'lae, the founder of the Balanced Form. By this time conflict raged across the surface lands and disaster loomed on the horizon. Eventually a great cataclysm occurred and the surface was lost to the Tei'kaliath's ancestors. Many laid down their lives so that the rest could take refuge underground. Ana'thelin is said to have been lost along with Ellisin'lae during this time, most likely slain in combat. Eventually her school, as well as Ellisin'lae's, would be taken over by Su'jhar, who would continue to teach the people of Shifaye'sindil all three existing Tir'ay styles.

Ana'thelin was a dark elf female with long blond hair and green eyes. She wore a long sleeved white dress with purple flora patterns on the sleeves, black pants, a black long sleeved undershirt, and sandals. She also wore a two pieces of string as an anklet and a necklace as well as light blue piece of fabric which is assumed to be apart of a sash.

Critical Actions and Relationship to the Clan:Edit

Founder of the Soft Style of tir'ay. 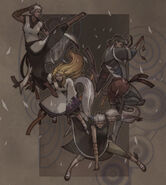 Add a photo to this gallery
Retrieved from "https://pathtopower.fandom.com/wiki/Ana%27thelin?oldid=9097"
Community content is available under CC-BY-SA unless otherwise noted.