Start a Wiki
The Battle At The Ruins was a gameplay event that took place on Day 8, and was the first major conflict that the Tei'kaliath were involved in. The successful outcome of this battle lead to the Tei'kaliath gaining a permanent settlement near Chel'el'Sussoloth.

Leading up to the battleEdit

After it was decided by The Will of the Clan that the Tei'kaliath would attempt to enter the ruins and negotiate with the ex-slave squatters who were currently living there. An attack was coordinated between Shiir, Quel and the remaining Ranked, with Quel and the scouts hiding in the ruins prepared to attack if negotiations with the squatters failed.

When An'jhali confronted their leader she attempted to reason with him, but the Tei'kaliath were rebuffed since An'jhal had identified herself as an Ill'haress, leading the squatters to believe that the Tei'kaliath were Vals. Negotiations fell apart further when the group of scouts including Ys'sa were discovered, and An'jhali had Shiir challenged their leader to a duel.

Shiir defeated the slave's leader, and while he attempted to surrender Shiir stabbed him through the heart, killing him. The Tei'kaliath who had been hiding in the ruins then fell on the slaves who had been chasing Ys'sa, and the remaining slaves fled.

After the battle was over, the Tei'kaliath settled into the ruins and claimed as their new home. Most of Path to Power 1 would take place here and over the course of the game the Tei'kaliath rebuilt the ruined fortress, eventually renaming it Ther'avare.

During Badai's story it was revealed that Faia had been among the squatters in the ruins, and her brother had been the leader with whom Shiir fought. She had been gathering food and returned just in time to see Shiir deliver the killing blow. She then sought revenge against Shiir, and eventually enlisted the amnesiac Badai An'Karaa to help. 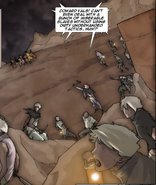 The squatters react to the presence of the warriors 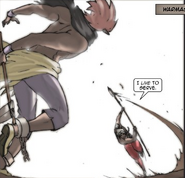 The duel between Shiir and the leader of the squatters

Shiir delivering the killing blow to the squatter's leader

Ys'sa shows she isn't the Tir'ay champion for nothing
Add a photo to this gallery
Retrieved from "https://pathtopower.fandom.com/wiki/Battle_At_The_Ruins?oldid=10494"
Community content is available under CC-BY-SA unless otherwise noted.