Bel'xullyn originally joined the healers while they were in the midst of treating the wounded caused by the Slaver Ambush. Her aid proved invaluable as the healers were starting to become overwhelmed by the work needed just to stabilize all the patients. She served as a healer for some time and became a somewhat ecognizable figure due to her red hair, distinct cloths, and outgoing personality. She was the one who gave Niar'suru his theme song and was also the one who first brought An'jhali the armor she often wore to battle.

Bel'xullyn became the first Ambassador for the clan and helped forge relationships amongst the Svart'elos, the Val'Nal'Sarkoth, the Vel'Sharen. After the Vei'Visa incident where a warrior of the Siksa'Santi clan was wounded, Bel'xullyn was sent to the Siksa'santi to try and clear up any misgivings. However Kendra declared that the words of a ambassador of a "treacherous Illhar" were worthless and had Bel'xullyn and her escort captured. With the help of the Nal'sarkoth, her release and the release of her companions was negotiated in exchange for healing the wounded Siksa'santi warrior.

Eventually Bel'xullyn stepped down as ambassador and gave the position to Xenon.

Healer: When she first appeared in Path to Power, Bel'xullyn kept her hair unbound and loose.

Bel'xullyn always tried to help everyone around her with everything she could. She loved to take care of those who needed help and, because of this, was training as a nurse. As a child she always was fascinated by red. She doesn't know why, but anything red is sure to catch her attention. She's not afraid of blood. It's more that she is attracted by the color than afraid of it. Her mother was unable to refuse the little child Bel's wish for red hair and spent many years learning how to give her this gift. On her twentieth birthday, her mother called her into the bedroom and worked a difficult magic that took a day and a night. When Bel woke up her mother was asleep in a chair next to her bed, her head resting next to Bel and holding the child's hand. She thought she saw blood on the bed and became concerned, but when she looked closer she saw that it was her own hair now a beautiful dark blood red. She lived a normal drow life although her mother might have spoiled her a bit much letting Bel'xullyn do anything she pleased. As she grew older, she took a liking to slaves and men. They were so kind to her, but when her mother noticed this she tried to be more strict. HOWEVER... The fall of the whole city happened. While trying to run away, Bel'xullyn and her mother were attacked and Bel'xullyn was wounded by a dagger that was thrown through her right eye. Bel'xullyn lost consciousness. Her mother was killed while trying to treat her. After a while, Bel'xullyn miraculously woke up in a lot of pain. Thanks to her mother's quick treatment she was alive... but at a terrible price. Crying a life's worth of tears beside her mother's corpse, she tore a part of her mother's dress to hide the wound... and still wears it as a reminder of that day. This is the only memento she decided to bring... to help her in times of indecision. This would help her choose the right path... or maybe the wrong one?

Now she tags along with refugees who seem to have a leader worth following --Ill'haress An'jhali. Maybe her salvation is with that women, but... what could she do to help? Since caring for others was the only thing she could ever do well... then... maybe helping to heal or cure the people in need would be a suitable option. Eating what's left of that old baked algae Bel'xullyn walked to the nearest cabin to find out about the Healers. With her long red hair waving in the cave's wind, that even the darkness could not swallow, she tried to fight off that cursed loneliness. . . . . .

Bel's first appearance. Hired on the spot as a new nurse. 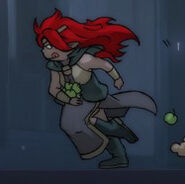 Bel'xullyn's original concept art.
Add a photo to this gallery
Retrieved from "https://pathtopower.fandom.com/wiki/Bel%27xullyn?oldid=10295"
Community content is available under CC-BY-SA unless otherwise noted.