The Black Sun, also known as Siyah-khorshed, are not so much a race or a clan as a nation of nomadic tribes that subsist of raiding and plunder to survive. They come in all shapes and sizes and some even have exotic skin-tones, such as red. Shifaye'sindil was invaded and destroyed by the Black Suns and caused the future Tei'kaliath to abandon the ruins, kicking off the start of Path to Power. Towards the end of Path to Power 1, Ther'avare was overrun by a large group of Black Sun led by Lady Sayatt. This race is not available for play.

Although willing to use overwhelming numbers to their advantage, the Black Sun seem to place some value in one on one combat. During the intial contact with the Tei'kaliath, a Black Sun berserker challenged the recently crowned Tir'ay champion rather than attack her outright.

While a nomadic tribe, the Black Sun are no strangers to seige warfare. The frst time the Tei'kaliath encountered them, they lured a squad out of the Ther'avare. They then held them hostage, most likely to lure others out. They also tried to break down the walls using Earth Sorcery or jump over them using Air Sorcery. Some method was also used to lower the air temperature around the western gate in order to freeze the Tei'kaliath defenders, and while effective it was quickly abandoned. During the siege the Black Sun also brought up a War Golem to get their techs close enough to demolish Ther'avare's eastern gate with mana bombs. Afterward the Black Sun did not push into the breach but rather held defensive positions and waited for the Tei'kaliath warriors to come to them. When the warriors led by War Master Taruna did sortie out to meet them, the Black Sun used mana bombs and mana bursts to soften up the incoming attack wave before meeting the charge with fresh warriors led by Lady Sayatt. This proved to be the decisive turning point in the battle as Taruna and her warriors were soon defeated.

Berserkers are large warriors who can take on multiple enemies at once. They are the least common Black Sun troops seen. They generally have very large weapons and will charge into a battle.

Skirmishers are small troops and are the most common Black Sun troops seen. They generally carry light weapons like swords, flails, spears, axes, and claws.

Jumpers are similar to Skirmishers in that they are small, light infantry. They can use Air Sorcery to propel themselves into the air to get over obstacles.

Mana Specilaists of the Black Sun use advanced Earth Sorcery as well as others to weaken defenses. There is generally one to a group and they have been shown using traditional summons.

Black Sun Techs are technical specialists which are unarmed except for bags of Mana Bombs, which are gems pushed to the brink of explosion with mana that detonate on contact with large concentrations of mana. They also operate golems and are the only Black Sun with uniforms.

Lady Sayatt is the leader of the group of Black Sun which brought about the fall of Shifaye'sindil and attacked Ther'avare. She was very powerful physically, able to jump and run with incredible speed. In a one-on-one duel she overpowered the Tei'kaliath's then War master Taruna several times. During the attack on Shifaye'sindil she also cut off the arm of one of the strongest deffending warriors (Badai) with a single stroke. And during the Black Sun Siege it took a mana bomb to defeat her, although she managed to survive the blast by leaping backwards at the last second. From the Black Suns' reaction to her near death, defeating their leader will pacify an attacking force, although this may only be true of that particular group of Black Sun. 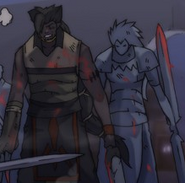 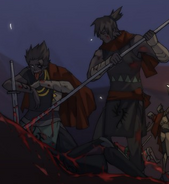 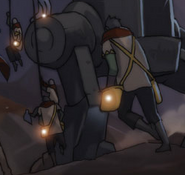 Several Black Sun Techs with Mana Bombs boarding a golem.
Add a photo to this gallery
Retrieved from "https://pathtopower.fandom.com/wiki/Black_Suns?oldid=8897"
Community content is available under CC-BY-SA unless otherwise noted.