Start a Wiki
Hanen is a small Hume village located on the western edge of Amaranth forest. The Tei'kaliath first came into contact with Hanen when the Blue Banner Expedition stopped in the village to rest and resupply, as well as to hire two feral guides.

When the Blue Banner Expedition finished scouting the area that would eventually become Ama'varde, they returned to Hanen to once again resuply. However when they got back they found that the village had been attacked while they were away and six villagers had been beaten to near death. The attackers were revlead to be kotorc raiders from the marshes north of Hanen. Deciding to help, the Blue Banner Expidition stayed for a day to treat the wounded and provide defense in case the attackers returned. These actions improved the relationship between Hanen and the Tei'kaliath.

After spending several days exploring the non-forested regions northwest and southwest of Amaranth, half of the Blue Banner expedition stayed in Hanen to await the arrival of the rest of the clan while the other half went on ahead to meet up with the rest of the Tei'kaliath. Eventually the entire clan stopped temperorarily in Hanen to pick up the members waiting there before finally continuing on to the site where they would build Ama'varde. It now serves as one of two known stopping points between Ama'varde and Chel'el'Sussoloth (the other being a Nal'sarkoth outpost located at the entrance to the underworld.) 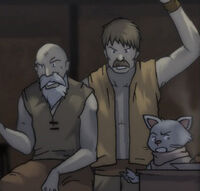 Citizens of Hanen (along with a feral translator) 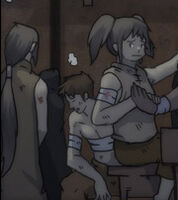 A group of wounded Hanen villagers being treated after the Kotorc raid.
Add a photo to this gallery
Retrieved from "https://pathtopower.fandom.com/wiki/Hanen?oldid=6525"
Community content is available under CC-BY-SA unless otherwise noted.