J'hon was a scout during Path to Power 1 and the founder of the D'rak family. He is also the younger brother to the families current Dev'ess Eh'rin. He died during the closing hours of the Black Sun Siege.

J'hon was of slightly above average height (for a male) at 189cm (around 6'2"), with a thin, but athletic toned frame (built for agility, not raw strength). He had blue/grey eyes and wore his Black hair cut short but rough. Having sold his original weapons and armour during the exodus, J'hon wore loose/flowing pants and a long-sleeved shirt, both black with red trim as well as a scarlet headband. All were well made, but also well worn from travel. He would also wear the uniform of the Scouts for a time.

Born as the youngest sibling to two older sisters in a semi-noble family with a reputation for producing fine warriors, J'hon was under pressure from high expectations from the beginning. His childhood was spent being forced into hunting and Tir'ay training, for which he garnered little respect (or love) from his mother or sisters (his father being capable but far too timid to do anything about it). As a result J'hon grew up as a quiet, almost brooding man, who said little, and refrained from showing emotions of any kind. It came as little surprise that as soon as he was old enough; he was forcibly enrolled in the Cities Defense force... Under the direct command of his eldest sister... While J'hon was not just willing but actually eager to prove himself, he also resented being under the command of his aggressive and overbearing older sister. Unsurprising then that when the opportunity to transfer to the expeditionary forces and receive training as a marksman, he jumped at the opportunity, indeed, he quickly distinguished himself as an excellent shot with a crossbow - even at extreme ranges. When the attack on the city occurred, J'hon, who was on leave from his duties at the time, was returning from a hunting trip, something he did whenever he could, both to practice his skills, but also to be alone and away from the expectations of others. He arrived at the outskirts to witness the city in flames, a mass of bewildered refugees streaming out towards him. J'hon dropped to his knees, he had failed to either protect his home or even die in its defense. J'hon allowed himself to be swept away with the exodus, broken in spirit as well as mind. This broken state would persist until well after the refugees arrived at there new home in Ther'Avare, the walls around his mind only finally beginning to fall once the city's own walls were completed. Even then, J'hon kept himself apart and closed off to those around him, only once he heard of the need for Harvesters did he step forward, surely by simply being a 'spare set of hands' he could not fail anyone ever again... Only time would tell if he could re-build himself and achieve his full potential... With his honourable death in battle, he finally achieved that goal, He was worthy of his family name at last... 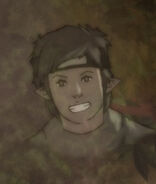 Add a photo to this gallery
Retrieved from "https://pathtopower.fandom.com/wiki/J%27hon?oldid=10132"
Community content is available under CC-BY-SA unless otherwise noted.