Jan'avin was the eighth to join the ranks of the nurses and continued to serve in this capacity even after the second exodus. Like many of the healers Jan'avin has served as battlefield medic during numerous conflicts including: the Vei'Visa incident, the Dvaraka War, and the Black Sun Siege. After the Tei'kaliath set up refuge in the Nal gardens, Jan'avin was amongst those who volunteered for the Blue Banner Expedition.

Currently, Jan'avin serves as one of the Mana Specialists in Ama'varde.

Path to Power 1: Jan'avin kept her hair in dyed black with red streaks pulled back into a braid. She wore a simple orange tank top with black pants. Occasionally, she was drawn wearing an orange split skirt over the pants.

Path to Power 2: Jana's hair remained dyed black with red streaks with strips of red braids interwoven into one large braid tied at the end. Her normal attire consists of a dark orange jacket, orange tank top, beige skirt lined with black and a black sash. She is of average height for a Tei'kaliath female, standing at about six foot even.

"M'lady, is there anything you would like to see improved or enhanced?" 12 votes. LA: Colony 21.

"Best lock away the relics until we learn more or have space to expirement." 3 votes (ignored). LA: Moon 2 Day 26.

Jan'avin was born to a minor noble house (Rylin'ana) that no longer has any significance. She had two younger sisters (one being Ilrae'mur'ss) and a brother. She does not know if they survived the fall.

Besides her formal training in Air Sorcercy, Jan'avin was also trained in first aid and has some skill in the healing arts from her old House.

Before the fall Jan'avin was sociable, cheerful, and very open. She enjoyed learning new things and loved being around people. After the fall, she retained her kindness, but became less sociable and much more reserved. She enjoys research over being active, and prefers a scroll or a book over social functions. She is the type to have many acquaintances but very few friends. She is pleasant to anyone who is pleasant to her and enjoys helping others.

Jana is a practitioner of the Soft style of Tir'ay and is fairly proficient, having come in second place in one of the non-warrior Ti'ray tournaments, losing to her superior and mentor, Elif. 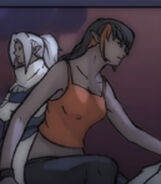 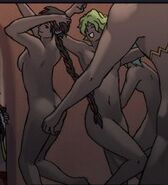 Jan'avin during the Black Suns Invasion.

Jan'avin helping to build Ama'varde's moat.
Add a photo to this gallery
Retrieved from "https://pathtopower.fandom.com/wiki/Jan%27avin?oldid=10958"
Community content is available under CC-BY-SA unless otherwise noted.