Tali was a warrior and the War Master's second in command for a time, although due to a falling out with Warmaster Shiir'fhayah she was demoted from her position. After leaving the warriors she briefly worked as a engineer before eventually being appointed as official Mana Specialist along with Lua'nar. She would hold this position for the rest of Path to Power 1.

Tali is also something of a fashion designer, having come up with the designs for Bel'xullyn's ambassador cloths, an alternate outfit for An'jhali, and her own Mana Specialist outfit. She also invented the popular card game "Queens."

She has since gone missing since the clan came up to the surface.

Ka'Taliyn never did get the chance to become a member of her mother's expeditionary crew. As the second daughter, Ka'Taliyn was the hand-me-down child, left for her father to raise while her mother and older sister were gone on their expeditions. Ever the scholar, her father insisted that a proper warrior should be well-rounded beings in both body and mind, and insisted that Ka'Taliyn study in academics as much as her Tir'ay, or her riding/weapons training. The infrequency of intense training sessions that would be given whenever her mother and sister were home, and heavy course load left gaps in Ka'Taliyn's military training. She has; however, become a quick and devoted learner out of necessity; it never takes her long to pick up a new skill. Enthusiastic, bright, and sometimes a little too serious; Ka'Taliyn is determined to prove her worth beyond her younger age, dye Shiir's braid pink (never happened), and somehow keep up with her studies that have managed to tail her through the exodus in the form of her adopted uncle Kir'ima, a former student of her father's.

Tali teaching An'jhali the basics of making a mana shield 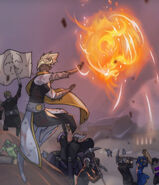 Tali during the Black Sun Siege. This is why you don't mess with the mana specialist.

Tali delivers some bad news.
Add a photo to this gallery
Retrieved from "https://pathtopower.fandom.com/wiki/Ka%27Taliyn?oldid=10135"
Community content is available under CC-BY-SA unless otherwise noted.