Khan'zalika was the first and only Slave Master of the Tei'kaliath. After the call went out for a Slave Master, Khan'zalika was the only one who responded and thus was hired by default. She was a tough mistress and never tolerated insubordination from the slaves under her, but she was also willing to treat well those who behaved.

On day 13 of the game, slavers appeared on the outskirts of Ther'avare. Along with Shiir, Khan'zalika went to talk with the leaders of the slaver group. The two tried to resolve things diplomatically with the foreign group, but the leader of the slavers made it clear that they would only leave if the Tei'kaliath gave them twenty two slaves. Not having enough slaves to meet their demands, An'jhali secretly ordered Khan'zalika to take the slaves on a walk around the ruins while Meck led the slavers in the opposite direction. Khan'zalika managed to keep the slaves from being found long enough for the rest of the clan to get into position and ambush the slavers. With the exception of Scout Quel's death, the entire operation went off without a hitch and Khan'zalika gained nine new slaves to oversee.

When the ranked system was abolished, she stepped down as Slave Master. She now lives with the rest of the Tei'kaliath in Ama'varde

Khan'zalika is a tall woman with a muscular build. She wears a blue high collared jacket with black embroidery, a white shirt underneath and dark blue pants

Khan'zalika is a self-made woman who, with limited resources, started her own mildly successful business buying, training and trading slaves. Having left her slaves during the attack on Shifaye'sindil she could only hope that the ones who found them would be merciful. She is sharp witted, has a positive outlook in life and the quick tongue of a saleswoman.

Khanza partaking in the swimsuit competition. 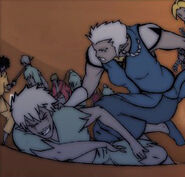 Khan'za subduing Joker Lady during an escape attempt by the former slavers. 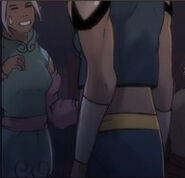 Khan'za's tall physique makes her a somewhat intimidating sparring partner.
Add a photo to this gallery
Retrieved from "https://pathtopower.fandom.com/wiki/Khan%27zalika?oldid=10144"
Community content is available under CC-BY-SA unless otherwise noted.