Meck was a well known warrior during Path to Power 1 who served as the leader of warrior squad two. The first battle he took part in was the Slaver Ambush and has fought in nearly every battle since.

After the Vei'Visa Battle, Meck was amongst those assigned to guard Ambassador Bel'xullyn while she went to negotiate with the Siksa'Santi. When Illhar Kendra ordered the Ambassador and her entire escort seized, he and the other warriors were taken by surprise and captured with ease. When a tentative peace was negotiated between the Tei'kaliath and the Siksa'santi, the ambassador and the warriors were released.

On Day 65 to 67, he was amongst the warriors chosen to escort a Val'Nal'Sarkoth caravan up to the surface and back. He returned with the other warriors fifteen days later with tales of their adventures. Apparently Meck developed a taste for bear meat.

Became the first Tir'ay champion of Ama'varde, as well as the first male champion.

Meck now spends his days at Ama'varde while his mate serves aboard the Tei'kaliath airship.

Has short red hair and a muscular build. Civilian atire for PtP1 consisted of white sleeveless shirt and red pants. Left eye is missing due to a injury sustained during the last battle of the Dvaraka war.

Meck was born to a common family that didnt have much, but they enjoyed life all the same. Hardworking and loyalty were two virtues that would describe the household. His mother was a weaver by trade who made wall hangings, rugs, flags, cloths, anything that was cloth really. His father a crafter, using stone and clay mostly. Statues, buildings, decorative moldings and collums. You order it, it would be made. This is how Meck grew up, around creativity his entire life. This left its impression on the young Drow. It gave him an open mind and a thirst to see new things. It also helped the young man to be orderly and well organized. Not to mention strong. When his parents were busy, he did what he could to help out. Carrying and sorting supplys. Working the store front takeing orders and receiveing payments.

It was dureing this time that Meck was able to follow his passion: reading. Meck would read anyting and everything he could get his hands on, from military tactics, mana uses, stories from the surface world, poems, whatever was in reach. Some of it inspired Meck to do something more with his life. What he read of the military tactics and stratagies is what made Meck choose to join the army. There they had tested and found his earth afinity and started to train him to be a pikemen. That is when the attack happened. He tried to fight and was nearly killed when one attacker slashed at his face. His Drill Instructer saved him from death and told Meck to protect the people as they flee. And so he made the exodus with the rest of the clan. Selling what gear he had for food to help others. but he lost confadance with himself untill the Tir'ay tournament. though he was not skilled enough to compeate, it awoke the flame of his duty once again. 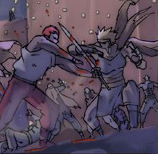 Meck fighting an enemy warrior during the Slaver Ambush

Meditation with Meck and friends.

Meck defeats Kay Nigit in the final round of the fourth tir'ay tournament.
Add a photo to this gallery
Retrieved from "https://pathtopower.fandom.com/wiki/Meck?oldid=10487"
Community content is available under CC-BY-SA unless otherwise noted.