Niar was the third to join the nurses and served in this capacity even after the second exodus. He has served as medic in every battle including both the taking and the loss of Ther'avare. At one point he was assigned task of crafting and designing new bandages and was give the title of "Bandage Man" and his own theme song. When it came time to explore the surface, Niar volunteered for the Blue Banner Expedition.

With Path to Power 3, Niar has opted to stay back at Ama'varde with his mate and daughter rather than go on the airship.

PtP1 appearance: Niar is below average in height for a Tei'kaliath male and has a rather androgynous appearance. He does not dye his hair and cuts it an inch above the shoulders. His attire consists of an orange short sleeve vest, white pants that reach down to his shins, and a leather wristband.

PtP2 appearance: After the timeskip, Niar trades his short sleeve vest for a orange and black long sleeve coat with a triangular grey piece of cloth across the torso. He also switches out his white pants for a set of grey pants that go down to his ankles and his leather wristband now belongs to his daughter, Ni'ainu.

"Ask our guides what they know about the Ferals who snuck into our camp." 1 vote. EA: Chapter 2, Epilogue 16.

Niar'suru was belonged to a family of middle class artisans known as the Loruglasse (he changed his family name to Sekai upon its formation.) The Loruglasse were somewhat well known for using a mana affinity known as empathy to read the desires of their clients, but when it came time to test his affinity it was discovered that Niar's latent abilities were quite weak.

His grandmother, the Loruglass matriarch, abused Niar as child using her empathy as a method of "toughening him up". This led him to become emotionally withdrawn as a child and to have a deep rooted hatred for all who try to justify their spiteful actions as being "good for people in the long run." However the rest of Niar'suru's family cared deeply for him and did their best to shield him from his grandmother's ire. When he became a young adult, he was sent to train under a master portrait artist in order to further his own artistic abilities, as well as to get him away from his grandmother. While he was studding there Niar'suru met two drow who would become his best friends.

When Shifaye'sindil fell almost everyone Niar'suru knew was slain, including the most of his family and at least one of his friends. The only one who might have made it out was his other friend but Niar had no way of knowing whether she survived. Having little incentive to stay, Niar'suru fled with An'jhali's group.

Niar joined the healers out of desire to help people, as his empathy and his personality makes him sensitive to the suffering of others. For a while many people joked that since the nurses "only consisted only of beautiful women" that meant Niar was secretly female (due to his androgynous appearance.)

Niar has a somewhat eccentric sense of humor due to his disdain for personal drama and his honest desire for those around him to be happy. However, when someone close to him is threatened or he's pushed too far, he develops a aggressively vindictive personality against whomever has slighted him or his own.

Niar has recieved training from Ilrae in learning how to better control his empathy. As his abilities grew, Niar discovered that for some reason his form of empathy seems to attract insects of all kinds. Thus he can often be seen in the midst of a large swarm insects, much to the discombobulation of those around him.

Niar appears for the first time

Niar on the battle field after the Battle At The Ruins

Treating the wounded for the Slaver Ambush 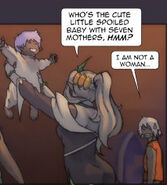 Niar laments his (then) androgynous appearance.

I believe this is what they call "zoning." 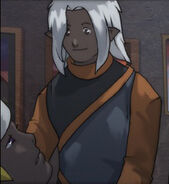 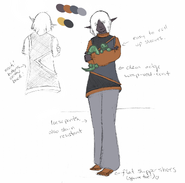 Niar updated wardrobe concept art by Autumnfires
Add a photo to this gallery
Retrieved from "https://pathtopower.fandom.com/wiki/Niar%27suru?oldid=10973"
Community content is available under CC-BY-SA unless otherwise noted.