Ri'ella is an active player who has taken on the role of a studio hand.

Ri’ella is around 6’4” in height. She has a slender built body with fair and very feminine features and many mistake her for frail. Her waist-long hair that has been done up in a French braid style. The color of her hair is white. Her left eye is gray and her right is amber. She wears black leather pants, a mid thigh length violet shirt with mid forearm length bell shaped sleeves. A single rope belt with stone beads is wrapped around her waist. She also wears basic grey boots. She is always one to try to protect those that she believes to be innocent and unable to protect themselves, such as animals or small children. She tends to try very hard to look at everything in a positive light for fear of becoming depressed again and useless to her clan. She will speak her mind but never out of turn and only if she thinks she has something worth saying. Well, mostly, unless she is in an overly happy mood, then she tends to ramble about nothing. She is best described as a Mama bear, as long as you do not threaten her or those she cares for or protects she’ll leave you be, but beware her wrath as she will use everything at her disposal to make you pay for the hurt your caused. 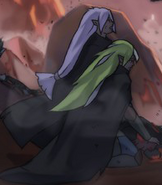 Ri at war.
Add a photo to this gallery
Retrieved from "https://pathtopower.fandom.com/wiki/Ri%27ella?oldid=10229"
Community content is available under CC-BY-SA unless otherwise noted.