Ro'sij started out as a scout serving under Quel. When the clan settled in the ruins of Ther'avare, she became the clan's first Architect. While holding the position for quite some time, she eventually resigned and handed the position over to Due'gar. She is listed among the casualties of the Dvaraka Invasion.

Ro'sij was of average height for a Tei'kaliath female and tended to wear simple tan colored cloths. Her hair was cut short and dyed black with the part framing her face dyed yellow.

She didnt know much about her surroundings, at least during childhood, it was simple, Ro'sij wouldnt lie. And she liked it like that, no child should have to live a hard life, thats what childhood is for. But eventually it wasnt to be. Her family always fought on the lines, and so would she. Despite her young age, she showed talent in polearms and the fluid hand to hand combat popular in the city and proved a quick study. Even though her training had given her an edge over those her age, her somewhat timid nature made her incapable of a killing blow. But when calamity hit the area, she found herself forced to find her resolve, her life and those of her clanmates relied on it.

When the tragedy happened, Ro'sij found herself abandoned by her family and her friends, unknown if they had died or simply abandoned her, her only feeling was gloom and inevitable death. Hugging a corner and waiting for the chaos to take her, she saw others running to safety and stumbling. It was at that moment she remembered her training and message she taught herself to keep training "Fight on so others may live on." Escaping her gloom and hopelessness, she rushed foreward and helped those fleeing to freedom. Risking her own life several times to aid others who fell behind or were trapped in all the chaos.

When it was said and done and the refugees began settling to start anew, Ro'sij didnt know why she was still alive. All logic dictates that she should have died that day, either by accident or by saving others. As she spread her gaze across the area, watching those who survived continue to fight with whatever they have left, she found a new resolve and courage in her. She was alive so she could protect those who too decided to fight on!

Gather scrap along with Quel. 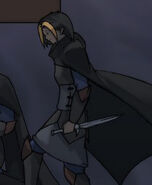 Ro'sij as a scout.
Add a photo to this gallery
Retrieved from "https://pathtopower.fandom.com/wiki/Ro%27sij?oldid=10182"
Community content is available under CC-BY-SA unless otherwise noted.