Rulishi was a warrior during Path to Power 1 and the head of Squad One, aka Wyvern Squad. She was amongst those who perished during the final hours of the Black Sun Siege.

Rulishia had recently joined the ruling Clan's military, a martial tradition in her family. Upon completion of her initial training she was granted leave to visit her family, who celebrated her successful graduation and placement among the Clan's army's first division. However on this night, was the night of the Fall, when the Clan fell into chaos and shortly thereafter began the Exodus. That night she witnessed the deaths of her entire family, along with that of her twin brother, Za'nair. Leaving her with nothing and no one. As such she has abandoned her family name along with all her possessions, except the clothes on her back.

During the Exodus, she remained alone; afraid to form any bonds with those around her, many of whom fell on the long road. In the past she was fiercely loyal to her friends and family and still is to this day, though now she is forming new friendships.Her hair used to be short, but has grown long during the Exodus. Once ronin, there is now a new Ill'haress, a new Lady to serve. 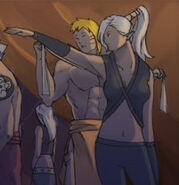 Being measured for armor.
Add a photo to this gallery
Retrieved from "https://pathtopower.fandom.com/wiki/Rulishia?oldid=10185"
Community content is available under CC-BY-SA unless otherwise noted.