Tamato is an active character who was a crafter under Ka'hab. She was also a member of the Blue Banner Expedition.

5'7" carefree and Childish and annoying at times. She has V cut green hair and a double straped green shirt with extra seprate sleeves and brown pants. Her shirt also has the Tei'kaliath clan symbol in the right hand corner.

"Leave?! We will only lose all our wounded or get killed protecting them." 14 votes. LA: Chapter 2, Black sun siege hour 6. (Note: this was an attempt to counter Ayu'mu's advise to leave the colony but Ka'Taliyn responded that they would be leaving no survivors behind since the eastern gate defenders were all already dead.)

In Shifaye'sindil she used to be the chief of a crafters guild. Is skilled in using earth mana to make dishes. 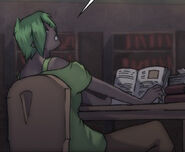 Add a photo to this gallery
Retrieved from "https://pathtopower.fandom.com/wiki/Tamato?oldid=10209"
Community content is available under CC-BY-SA unless otherwise noted.