Start a Wiki
The Fall of Ther'avare, also known as the Black Sun Siege, refers to the attack on the city carried out by the Black Sun lead by Lady Sayatt and the subsequent abandonment of the city. The battle took place on day 12, month 3, year 1099 of the moonless age calendar. It was the last battle to take place during Path to Power 1 as well as one of the fiercest.

The battle opened with Black Sun warriors coming seemingly out of nowhere at the conclusion of a Tir'ay tournament in Sasunra and launching a simultaneous attack on Ther'avare and the Riverland.

In Sasunra, Nova and a group of several Tei'kaliath attempted to fight off a Black Sun berserker, and took shelter in the settlement's medical station. After the Black Sun lost interest in them they were able to sneak in through the Western Gate and rejoin the rest of the Tei'kaliath fighters.

Mana specialist Lua'nar attempted to disrupt the golem using earth sorcery from the top of the East Gate, but she was unsuccessful and began to suffer from mana deprivation. When the golem finally reached the eastern wall, enemy engineers atop the golem lobbed mana bombs at the defenders atop the walls. When they made contact with the defenders' mana shields, the bombs went off with a tremendous explosion and a sizable hole in the eastern wall. Miracously noone was killed in the explosion.

Sayatt engaged war master Taruna in a surprise attack, and the 20 warriors with her were all taken out of action by the resulting attack. The armored pack lizard was also killed in this fight.

A combined effort by the scouts, crafters and mana specialists was eventually able to disable the golem after Kitab was able to fight off the pilot.

In a desperate attempt to turn the tide of the battle, Kir'ima took one of the unused mana bombs and performed a kamikaze run against Sayatt. The blast resulted in heavy casualties on both sides, and though it did not kill Sayatt it did stop the momentum of the attacking troops, who withdrew from the field. By the time the Val'Nal'Sarkoth, who had come to the cavern's edge, were able to make contact with a few Tei'kaliath, including Ambassador Xenon, who was carrying the wounded Kitab, the Black Sun had completely withdrawn. The Nal'Sarkoth also reported that the Val'Sarghress were massing at the cavern's edge, but were being held back, and this helped convince the Tei'kaliath that Ther'avare should be abandoned and they should take shelter in the Nal'Sarkoth's fortress. In total the battle only lasted for about six in-game hours.

The battle was a heavy loss for the Tei'kaliath and showed that they were vulnerable without aid from allied clans. To the rest of Chel'el'Sussoloth watching, this battle was a clear indication that the Tei'kaliath were unsuited to the task of guarding one of the most important gateways to the city.

However Rel'lumia Val'Nal'Sarkoth still saw potential in the Tei'kaliath. She proposed to An'jhali that while political fallout from the battle would make it difficult for the Tei'kaliath to resettle in Ther'avare, it might be possible for them to form a Nal sponsored colony on the surface far from Chel'el'Sussoloth. Ultimately the Tei'kaliath agreed and eventually formed the surface colony of Ama'varde, where they now currently reside.

Nova, Toreuol and Tidus face off against a Black Sun berserker in Sasunra

After a tough fight, the defenders in Sasunra were injured, but not out of the fight

The eastern wall is destroyed

The Black Sun War Golem, with several scouts and the Spider Golem in the foreground

The group in Sasunra makes a break for it

Someone cue the Randy Edelman

Lady Sayatt appears, heralding a turn in the invaders' favor.

The War Golem falls to the ground after a combined effort

Someone (Kir'ima) set up us the bomb 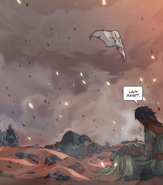 Sayatt proves to be harder to kill than Jack Harkness 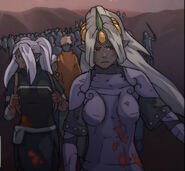 In a cruel twist of fate, the Tei'kaliath must flee en mass from their home a second time.

Searching through the remains of the battlefield
Add a photo to this gallery
Retrieved from "https://pathtopower.fandom.com/wiki/The_Fall_of_Ther%27avare?oldid=11002"
Community content is available under CC-BY-SA unless otherwise noted.