Start a Wiki
The Val'Sarghress are one of the 9 Great Clans of Chel'el'Sussoloth, and bitter rivals of the Vel'Sharen.

During Path to Power 1 it was discovered that Ther'avare's Iron Mine contained a back door entrance to the Sarghress cavern, though it was ultimately decided by The Will of the Clan that it should be sealed up.

The Tei'kaliath did not have any direct interaction with the Val'Sarghress during the game, though a Wolfrider was seen observing the aftermath of the battle with the Vei'Visa, and several members of what many players suspect were the Fallen Legion appeared in Ther'avare on Day 87 to deliver a warning about siding with the Vel'Sharen.

During the Black Sun Siege it was reported by the Val'Nal'Sarkoth that a group of Sarghress were waiting at the cavern's edge to fight the Black Sun. This knowledge was one reason that the clan decided to abandon Ther'avare and take shelter in the Nal'sarkoth's gardens.

More information on them is available in the Moonless Age comic as well as That Other Drowtales Wiki.

The Sarghress stand as the fiercest opponents of the Sharen and seek to bring them down.

The Sullisin'rune and the Sarghress are steadfast allies and together seek the overthrow of the Sharen.

Two members of the Fallen Legion 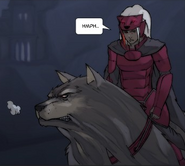 A Sarghress Warrior observing the battle with the Vei'Visa
Add a photo to this gallery
Retrieved from "https://pathtopower.fandom.com/wiki/Val%27Sarghress?oldid=10455"
Community content is available under CC-BY-SA unless otherwise noted.